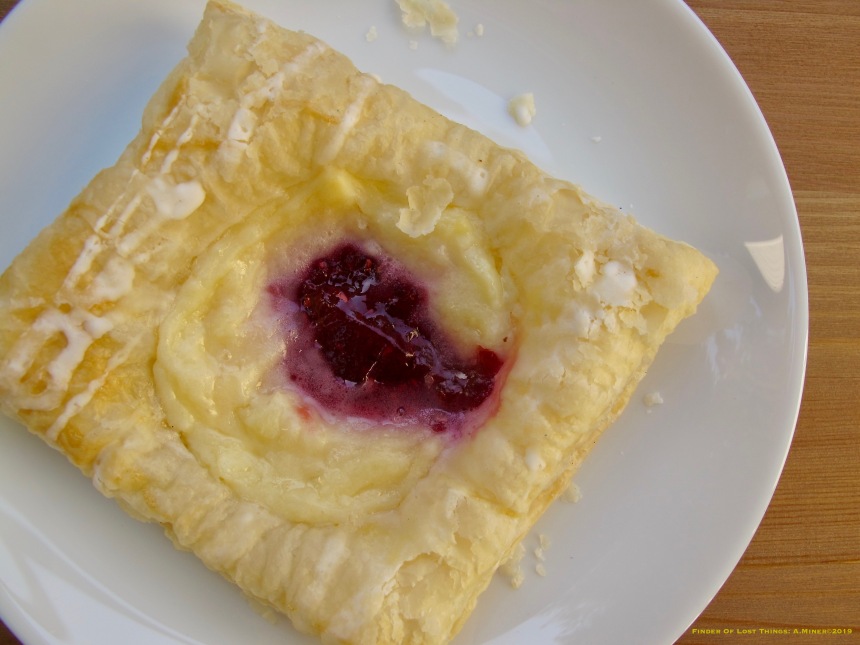 Okay – so not the best danish I’ve ever eaten, but the dollop of raspberry jam is always delicious! And helped chase away the bitter taste left in my mouth…

Sarah and Laney (and the boys) were sitting outside on the veranda sipping coffee when we returned. The three of us (and an amused plus two) headed straight into the dining room to snag our favorite flavor of danish before the breakfast bar closed.

On the walk back to the hotel our conversation devolved from the apologetic maple bacon scones to our general favorites among the pantheon of baked goods – cakes, cookies, pies – we covered them all. So when reached the hotel we were more than ready for second breakfast (which completely undid all the health benefits of our morning walk).

The fog continued to cling to the treetops, and from the small specks of sky we could occasionally glimpse, rain looked likely. So instead of heading back outside for another hike, we trooped to the game room with plates of danishes in our hands.

Unfortunately, we weren’t the first ones with this diversion in mind, the room was filled to the brim with people putting together puzzles and playing games (with a very few were reading books). Claiming a table nearest the window Wood went in search of an unclaimed board game which still possessed all its pieces.

Which, at this point, was as likely as finding the Marx Brothers’ missing first film next to the Yahtzee box (containing four of its’ five dice) on the top shelf.

Never one to give up, Wood won the day when he ferreted out a full deck of cards wedged in the back of the games closet and decided to teach the others (plus one kid who was hanging around our table hoping to score a danish) how to play bridge. (Wood and I acquired a taste for bridge from my Aunt Pearl and her cronies – our love of pastries rose from his Gran’s kitchen).

Since only four can play at a time, I sat the first rubber out – which as much as I love playing – worked for me. Pulling the armchair closer to to the fireplace I propped my feet up on the hearth and took stock of all the good things surrounding me – a raspberry danish & coffee at my elbow, a warm fire toasting my toes and my friend’s laughter ringing in my ears.

My Stalker is The Pink Lady who is a Woman In White.

Despite the denting my calm took under this progression, I forced myself aboard this uncomfortable train of thought.

After a few moments of watching the flames dance, I closed my eyes and threw my head back, rhythmically bouncing it against the top cushion of the chair. All the while making a concerted effort not to let loose a string of profanities (there were kids around after all) when I figured out exactly where I stood.

My quandary placed me directly on the corner of Bitter & Sweet.

They say all roads lead to Rome. Perhaps that’s true. But I am starting to suspect some masochistic engineer figured out a way to steer travelers repeatedly thru this junction on the way to the heart of the empire. Or maybe these crossroads are scattered at alternating intervals along the road, so you don’t realize where you stand until you look up and read the sign. Either way, I find myself here with disturbing regularity, a corner I do not want to frequent.

This damned corner with its’ loathsome words is where Romeo and Juliet find love but are forever separated by a name. Where dreamers can follow their dreams but are required to make money. This is where my opposition to the Woman In White has placed me.

No one would ever know if I just left her on the mountain.

Even with her increased vita, chances are she didn’t possess enough energy to actually kill Mr. Grindle (and didn’t he deserve a broken leg every now and again?). Clearly, the locals know about the Woman In White and have taken measures against her. So the odds of her coaxing anyone else off the path are pretty low. And the salt will render the cairn inert eventually. Probably.

Walking away would allow me to avoid all risk of discovery.

So much easier to let sleeping dogs lie.

But it’s not the right thing to do.

Fortunately, I still had my raspberry danish and a lukewarm cup of coffee to remove the bitter taste from my tongue.

1.11 We Worship At The Altar Of The Bean

Posted on November 2, 2018 by Finder of Lost Things

The heady scents of coffee, sugar and bacon enveloped me when I entered The Altar of the Bean (or The Altar as it is known amongst the regulars, neighborhood and social media). The controlled chaos of baristas, cashiers and bakers behind the counter snagged my attention first, the pastry case came second and when I spotted the espresso machine in all its glory, I stood transfixed – I’d been absent from here for far to long. When finally I snapped out of the hypnotic reverie which gripped me, I spied Beatrice tucked in the best lit corner of the cafe reading a book with an impressively large cup in front of her.

I made my way to the marble-topped table, feeling a bit awkward. I always feel odd when meeting a friend of a another friend without said original friend there – acting as a translator or referee? You never want to put the original friend in an weird fix if it turns out you actual loathe each other (I am exceptional at borrowing trouble). Fortunately Beatrice glanced up from her book before I reached her and smiled.

“Hey. Mind if I get coffee before I sit down?” I deposited my outerwear accoutrements on the chair opposite her while she answered, “Not at all.”

“Would you like a refill?” She shook her head no and I went to wait in line. I dithered over my selection while waiting, lemon Danish? A bear claw? Croissant? Or chuck it all and get a bacon, egg and cheese on pita? I glanced back at Beatrice, sucked into her book again. Hazard of the job I suppose.

My vacillating was interrupted by the barista at the counter asking what I wanted to order – a raspberry croissant and caramel latte, please. When my order was up, I rejoined Beatrice at the table where she held up her index finger while her eyes moved swiftly over the page, “One page to the next chapter.”

“No worries.” Which was fine by me as the croissant was proving to be a challenge. The raspberry jam squished out of the end onto my chin and fingers with such precision I could only conclude the Altar some how worked out a way to turn a dollop of jam into a guided missile whose sole focus was to besmirch a shirt front. Perhaps if I light a candle and offer up a coffee bean as penance for my long absence from this holy place, my shirts will be safe again…. (Yes they have an actual altar, they’ve adopted the Greek god Dionysus as their patron. Like I said, they take their coffee very seriously, or perhaps the owners are Greek. Could go either way.).

Placing an index card in the book to hold her place, Beatrice set it aside and tried not to laugh at my struggles. I must admit the mound of napkins in front of me was impressive, but I won the day and managed to keep my shirt front free from stains.

I started with a soft pitch, “What book are you reading?” There was no cover art and I didn’t see who the author was before she put it away.

“The new Ernest Cline, due out next year. Pretty good so far.” She finished her coffee and arched her eyebrow at me. New Ernie Cline? Seriously? She’d put the book back in her bag so filching it was out of the question. Well that an our passing familiarity. I ruled out mugging her in the parking for the same reason. Curses! (You may ask why my go-to strategy for acquiring the book features a criminal element? One night of fun did not mean we were on book borrowing terms with one another – Wood and I took twenty years to achieve this level. I mean what if we stopped talking right after I lent my favorite out? Tragedy. Is theft the obvious answer? Perhaps my bibliophile priorities may need tweaking…not that I would really resorted to these methods…).

Focusing back on real life again, ”And while this is a fine book, I did ask you to meet me here for a slightly different reason.” Smiling I appreciated her directness, since the jam incident and my larcenous heart didn’t make me feel any less awkward and I was intrigued to figure out where this conversation was going. I picked up my latte and blew on it while I waited for her to continue.

“You mentioned the other night that you needed to move out your house at Nevermore rather quickly. Have you found a new place yet?” Her fingers tapped the the edge of her saucer while she spoke.

“Not yet. It’s number two on my list. Why?”, taking my first sip of coffee.

“I was wondering if you’d move in with me?”