Tuesday night, after my second shift for FLYT, I was starving.

Due to a series of unfortunate events (my last Senior Center fare running late, hitting every single red light in Rye and a peewee soccer team taking over the preponderance of tables at The Diner On The Corner), I failed to secure myself some supper in-between shifts.

(BTW – A leftover handful of plantain chips and pumpkin seeds does not a dinner make.)

Exacerbating the hollowness of my midsection, I ferried about a gentleman who would not stop waxing poetic about either his takeout or the new food truck at THE HUB. (Which apparently serves the ‘world’s best biscuits and gravy’ – according to their propaganda and the guy’s ravings. Which of course, I took silent umbrage with – because no food truck in the history of ever can beat a woman who’s been making them from scratch once a week for well over seventy-five years. But I digress.)

Rather than committing petty theft and sampling the second-best biscuits in Rye – I knocked off a half-hour early instead.

Fortunately for everyone on the road, my tummy waited until after I pulled the Princess into the alley before hijacking every iota of processing power my brain possessed in order to recall the proper way to make a roux. Once I was completely free from worrying about silly things like crashing into a tree or creaming Ms. Hettie’s guard gnome (the Lavender Lady may be too stately to sport cute lawn ornaments, but it seems her garage is not). My tummy commandeered the remainder of my cognitive abilities to conduct a mental inventory of the contents of the fridge, freezer, and pantry.

Indeed, so enthralled was I in recalling Wood’s Gran’s instruction on the proper way of making a roux…I not only missed the actual aromas emanating from the kitchen, but the raised voices reverberating through its door. Until both the chagrin of walking into the middle of the personal conversation and the heady bouquet of chicken, cumin, cilantro, tomatoes, spicy peppers, and rice – hit me simultaneously.

Successfully jarring my mind and tummy from their culinary fixation.

Ms. Hettie (sitting at the table sipping some amber liquid out of a mason jar):”…regrets disowning you.”

Beatrice (using a paring knife to emphasize her point): “She only regrets it because she wants my help…evening Phoebe, dinner’s nearly done.”

Ms. Hettie (turning towards me rasped out): “If you would kindly give us a moment, we are discussing a family matter.”

Me (stammering and backing out the door): “I’ll just…”

Beatrice (stabbing an avocado): “Ms. Hettie and I are done with our discussion if you could grab some plates that would be great.”

Ms. Hettie (smacking the bottom of the jam jar against the tabletop): “We most certainly are not.”

Without a word, I dumped my pack, cap, and coat onto the nearest chair and scurried over to Beatrice’s side. Sighing with relief as I managed to save her fingers and the avocado from the colossal sized cleaver she’d swapped the paring knife for in a fit of frustration over her trouble deseeding the large berry.

Me (surveying the bevy of brightly colored veggies lined up next to the cutting board): “I’ll finish up?”

Beatrice (shaking her head while surrendering the massive knife): “The garnish.”

Nodding, I switched from her knife of choice to one slightly less Brobdingnagian, then went to work opening up the Avocado while trying to fade into the foreground.

Beatrice (pulling some placemats out of a drawer): “How can you ask me to go back there?”

Ms. Hettie (wheezing after a large sip of scotch): “You find things for strangers all the time.”

Beatrice (utensils tinking together as she yanked open another drawer): “Treat them as clients? They’d never abide by the contract or pay me.”

Ms. Hettie (refilling her drink): “So make them, I’ll lend a hand if needed. I doubt either of us can fall any further in their opinion.”

Beatrice (closing the cupboard): “Unless I happen to prove she did it.”

Posted on October 9, 2020 by Finder of Lost Things 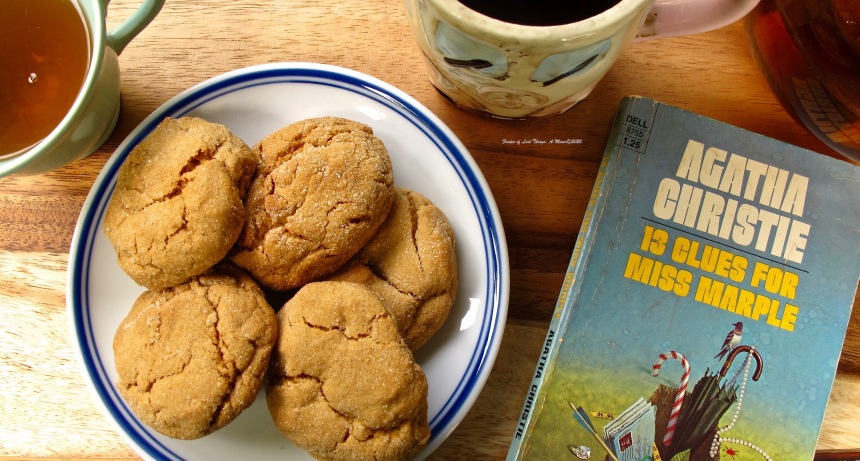 Choking on my pull of pumpkin milkshake, I wrestled with the Princess’s steering wheel trying to keep her from swerving into the oncoming lane (there wasn’t anyone else in sight, but keeping up good habits is always recommended). Not once, in our months of sharing rooms in the Lavender Lady, did I suspect Ms. Hettie and Beatrice were related.

My Miss Marple skills need some work. Perhaps I should ask Leo for some knitting lessons….

Holy mother forking shirt balls, I should probably not refer to Ms. Hettie like that to her niece.

“You should hear what she calls you.” Beatrice said in her mildest voice. “What made you think she snitched on us to Little Ben?”

Distracted from panicking over my gaffe (which also successfully lowered my volume dial from a nine to a five), “She was the only one I could think of, outside of the four of us, who might have known where we were going.”

Glad she glommed onto my train of reasoning so quickly, “She keeps pretty close tabs on us, and Little Ben was tipped off…So I thought she might have made the call.”

Silently nodding her head in time with Moonlight Serenade (KARB was paying tribute to Glenn Miller today), she took a moment to respond, “It makes sense I grant you, but no, she would never do something like that. She can’t stand tattling. Plus, I’m her favorite niece.”

Back to square one.

Bummed at the conviction Beatrice spoke with, I moved on. “Why didn’t you tell me you two were related?”

Clearly laughing at me without actually uttering a sound, Beatrice made an effort to smooth my jangled nerves. “Because you two clearly enjoy your skirmishes, and I didn’t want to ruin it.”

My statement generated a stare; I could physically feel boring into the right side of my skull. “Really? So you didn’t bake several batches of Earl Grey cookies, filling the entire house with their aroma last week, in order to lure Ms. Hettie into the back garden? Where I found you both enjoying them, drinking London fogs and bickering about quail when I got home?”

Hunching over the steering wheel, “Those were extenuating circumstances, I was going stir crazy, and she brought the tea…” The words sounded petulant, even to my ears. “Fine, I did. But when you say I lured her with cookies, it sounds unsavory.”

Fidgeting with the straw, “During a visit, when I was younger, I overheard her telling my mother that being called great by us kids made her feel old, so I started calling Ms. Hettie instead. It stuck.”

Curiosity creeping into my voice, “I’ve never asked, but how did you end up living downstairs from Ms. Hettie?”

Putting down her drink, she ran her thumb up and down the seatbelt a couple of times before answering, “Ms. Hettie took me in and told my family off after we had a falling out. We respect each other’s space, so the arrangement worked well for both of us, now I keep them from pestering her about moving to someplace smaller.

Sensing her reluctance to canvas the topic further, I moved on to something much funner. “Do you think Wood suspects?”

Out of the corner of my eye, I watched a smile slowly chase away her frown, “No. I spoke to Laney yesterday, and he thinks he’s coming over to give you one last check-up and a celebratory dinner. He’s clueless about the evening’s entertainment.”