Tag Archives: our lady of the rose suit 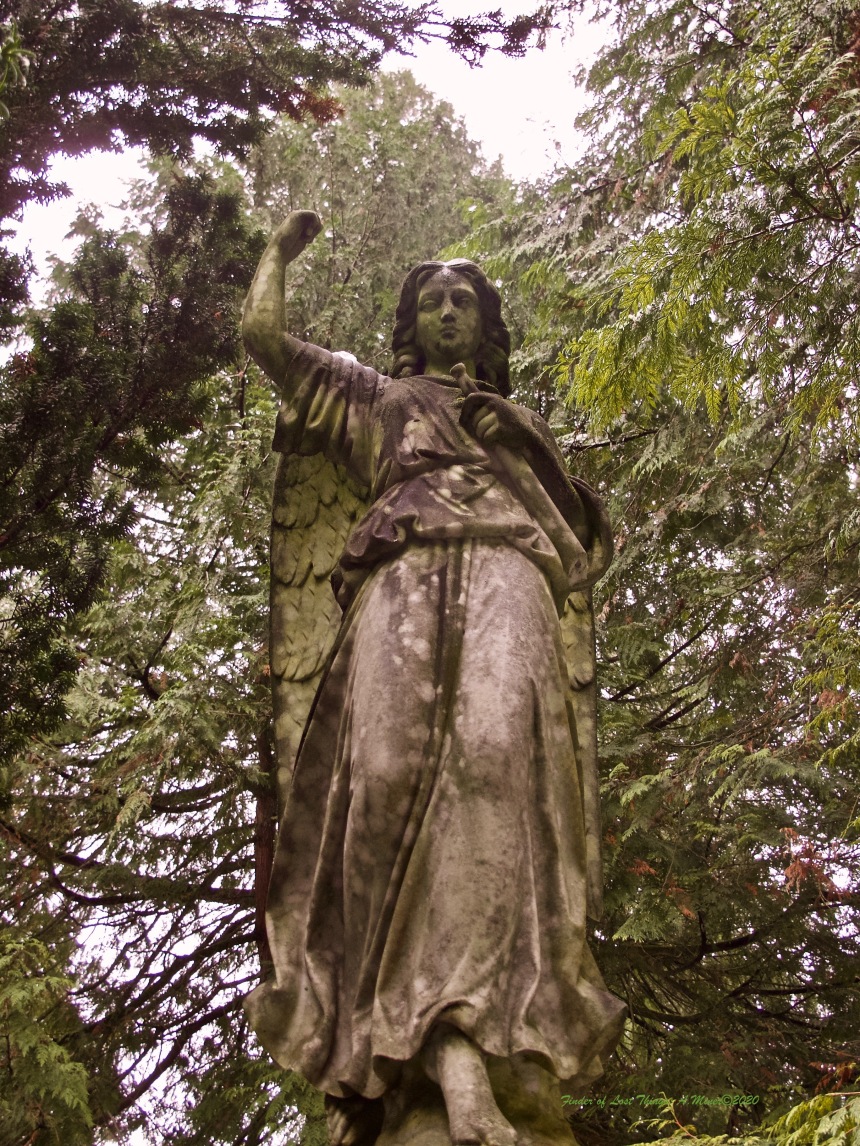 If the Emerald City ever possessed an abandoned cemetery, this is precisely what it would look like.

The only difference? Rather than the gleam of emeralds arresting the eye, lichens and mosses mimicked the jeweled tones made famous by that legendary city (and entirely engulfed every headstone). The lack of those brilliant precious stones, as we don’t actually live in the land of Oz, is probably for the best. Since it significantly reduces the chances of grave robbers raiding the place. On the flip side, if a frieze of emeralds rimmed the central burial or statue’s plinth, might have kept the tenants of this family plot on someone’s radar.

Seriously, if the entrance is any indication, no one’s visited this place in forty years.

“They’re pulling our legacy apart for money, it’s a disgrace, I know. But I can’t stop them, Maud.”

Catching me in the midst of a spider shimmy, I turned towards the sour voice and spied a woman in a rose-colored silk suit sitting primly on a variegated green bench.

Our Lady of the Rose Suit (hands clenched into fists): “How can I save it, Maud?”

Thankful for the thick layer of evergreen fir needles underfoot, I took a couple silent steps to my left, following her gaze trying to gain a glimpse of the elusive Maud and….nothing. So on the upside, she hadn’t pounced on (or in fact acknowledge) me after my unceremonious eruption into the verdant family plot.

On the downside, she appeared to be talking to herself – which never bodes well.

Our Lady of the Rose Suit (lips puckered): “Yes, they’ve emptied the library.”

Taking advantage of her disregard, I scrutinized Our Lady of the Rose Suit carefully. Her accessories (a matching rose-colored pillbox hat & rhinestone-studded cat-eye glasses and white gloves) plus the cut of her clothes reminded me of the illustrations on early 1950s Simplicity Patterns.

(I’m familiar with them due to spending time in Aunt Pearl’s sewing room. Being a Home Ec. Teacher and packrat – she’s kept all of her, and my Great Aunt’s sewing patterns – under the premise of everything old is new again, eventually.)

Coupling this sartorial impression with her rigid posture and general air, Our Lady of the Rose Suit struck me as a woman who required an introduction before saying more than a hello or commenting on the weather. (Not unlike Ms. Hettie – the sourest lemon on any tree.)

Which means, at minimum, I need her name.

Gazing at the dozen and a half moss encrusted gravestones, I wiggled my toes in my shoes, hoping they’d give me my usual shortcut. But instead, and despite the fact, my sneakers had finally stopped squelching wetly with each step, they persisted in their impression of icicles. Fantastic.

Our Lady of the Rose Suit: “They’ve ordered the molding, panels and cabinets stripped out next.”

Okay, fine, I don’t need them to figure this out. I possess other skills.

Pulling out a small notebook, pencil and pocket knife from my pack (while palming a small tin of high-quality hand-cut sea salt, just in case), I used the first two items to sketch out the layout of the Von Haeville family plot, then numbered the stones on my rough map.

Stepping over the fallen fir bough to my left, whilst keeping a weather eye and half an ear on Our Lady of the Rose Suit, I knelt down in front of the second stone on my list. Using my pocket knife, I skimmed the emerald green coating from the marker’s face revealing, “David Von Haeville, Loving Brother, Husband, and Father 1890 – 1977”.

She didn’t shift an inch in response to my actions – not that I want her to pounce mind you – but ninety-nine percent of Residents take an interest in any activity near their genesis points, especially if no one’s popped by in a while.

Our Lady of the Rose Suit: “No, I never moved it.”

Recording the epithet on David’s stone into my notebook, I crab-walked to stone number three. Using the same process as before, I scraped away the grave moss and recorded what lay beneath. Then repeated the same process until a bright current flickered across my fingers on lucky number fourteen (lucky because that meant she started off as a Resident).

Peeling away the thin green rind, I discovered Our Lady of the Rose Suit’s name – Ina Von Haeville. Weirdly, only Ina’s name was etched into the stone, nothing else.

Ina Von Haeville (fists bouncing slightly off her lap): “Yes, it’s the last one left unsullied by their influence.”

Sitting back on my heels, I closed my eyes, took several measured breaths, leaned forward, and placed my hand back on Ina’s marker. Ignoring the electricity sparking over my fingers, I concentrated directly on Ina’s Vita. No stinging or biting, unlike the last pink-clad woman who’s Vita caused my arm to go numb. But it did contain a few discordant notes, less than I expected, characteristic of an Errant or Resident suffering from loneliness and/or isolation.