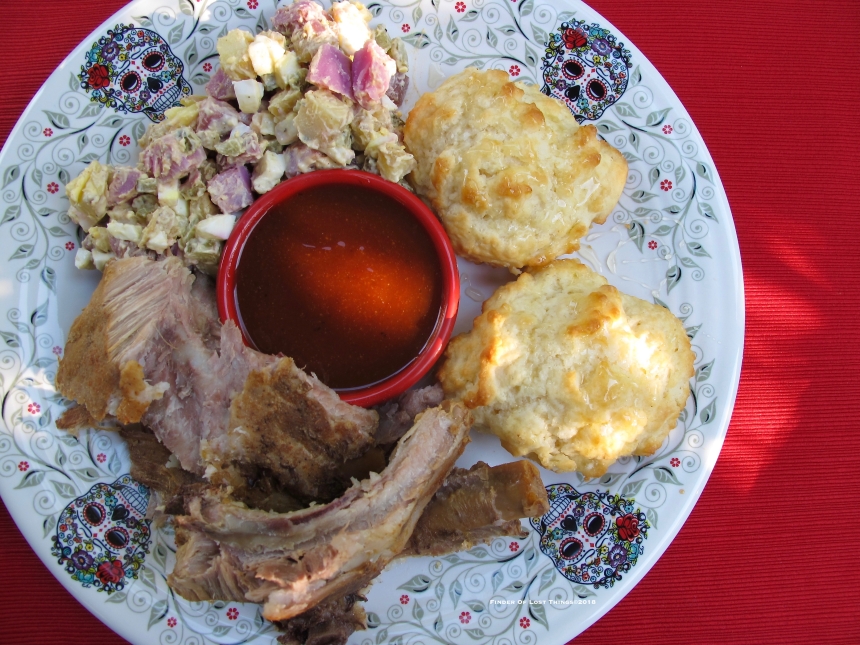 (Take-Out from the Spare Rib from a previous visit…)

My half-day flipped into a full-day when a couple of the Senior Center members asked me for a favor. They had a hankering for barbeque and wanted to go to the best joint around, The Spare Rib. Familiar with the unyielding grip of a food craving we came up with a compromise. I would drive them there (it was an hour one way) if they got their food to go and didn’t eat in the Princess (good bbq is Messy with a capital ‘M’). The fact I just flat like Betty and Joan didn’t hurt either.

Moreover, the flu-induced set schedule ended in a couple of days and with it the regular hours. So earning a few extra brownie points amongst the Center’s members seemed wise.

When I finally dropped them off, bbq in hand, at their apartment building I was starving and had zero interest in cooking. While the bbq whetted my appetite, it wasn’t what my tastebuds hankered after this evening.

My heart’s desire could only be found at the Rusty Hinge – a nice thick Rueben sandwich (they make their own Rye bread, Russian dressing and sauerkraut – it is to die for) and hand-cut fries. When I slid into my preferred booth, the one in the back next to my favorite pinball machine, my bones fused to the vinyl.

My poor body was unused to the amount of running we did last night and needed a moment to regroup before attempting to retake my Addams Family crown (aka the high score that Benedict stole from me). Leaning my head against the scalloped cushion, I took a deep breath and let my mind float along the waves of ambient stimulus – the aroma of sautéing onions filtering from the kitchen, errant strands of dialogue emanating from the pinball machines and groans from the football fans watching their team commit yet another penalty. Slowly my mind spun until it landed on the conundrum Sarah placed in my lap earlier today (she’d texted me after our marshmallow bargain).

Sarah: Just thought I’d let you know – Little Ben was tipped off that you guys were coming last night.

Sarah: He let it slip to Seth last night. Someone called him. That’s how he had security, the MacGregors and the groundskeepers on site so fast.

Me: Crap. Are you sure he doesn’t know it was us?

Sarah: Yes. I don’t think he could keep it to himself if he did. He’d have called a meeting to inform all us you were banned from the property. Like he did with Sue.

Me: Any clue who called him?

Sarah: None. This is all second hand, I didn’t want to grill Seth – might send up a red flag.

Me: Thanks for the heads up!

(Or No Problem Any Time)

Ruth broke into my train of thought to take my order (and Beatrice’s she was meeting me here), which was fortuitous since I might have drifted off in another second.

If correct Sarah’s data spun the previous night’s events in a whole new direction. But who on earth knew we were bound for Nevermore last night? On top of that, other than Little Ben, who would care?

Speak of the devil, and he shall appear.

My mulling moved to the back burner when a familiar bulky form barreled across the floor towards my booth.

Reaching my table Little Ben’s voice sunk into conspiratorial tone, ”Did you hear about what happened in Nevermore last night?”

“I read about it in the Blotter this morning.” His question told me Sarah’s assessment was correct. If Little Ben had figured out I was among those he’d chased around Nevermore last night, he’d have let everyone hither, thither and yon know it.

Little Ben’s face set into a grimace, “That’s what I wanted to talk to you about.” Without so much as a by your leave, he started moving towards the empty side of the booth to take a seat. Unfortunately (for him, not me) he found the booth’s entrance unexpectedly cutoff – Beatrice had arrived.

Taking off her long purple coat, she laid it down on the seat between us and slipped into the booth, “Sorry I’m late. Things are crazy at Pulp right now. Hello! I’m Beatrice.”

Biting my lip, I watched Little Ben’s frustration at being thwarted cross his face, “Hi. I’m Ben. I was just discussing something with Phoebe.”

Beatrice, draping herself with an air of innocence, “Oh, you’re Phoebe’s former manager. I owe you a big thank you!”