1.52 Be Careful What You Tell Children 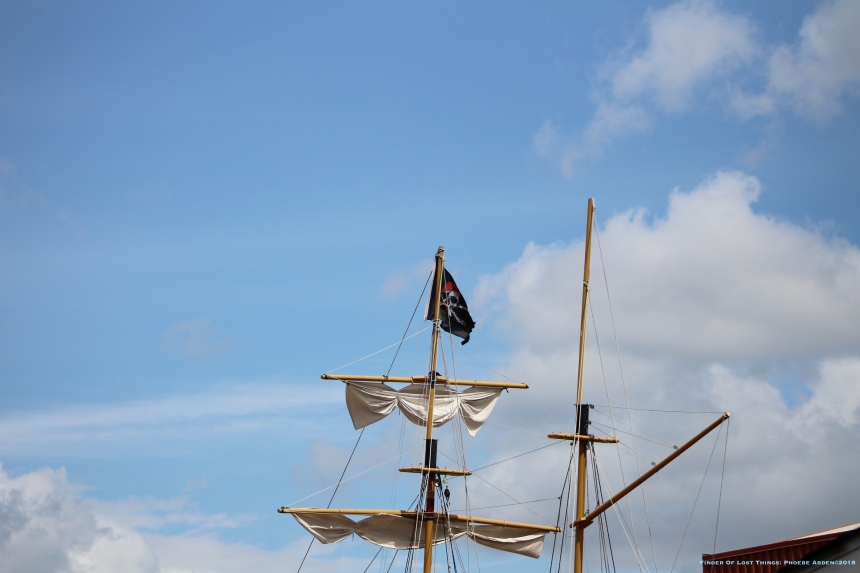 Why did Wood unleash his wickedest smile upon unzipping a zipper?

Because he knew I wouldn’t welch on a bet.

Even though I really wanted to.

Back in the day (when we were both ten) I lived next to a gentleman named Sal. Sal towered above everyone in the neighborhood, being around 6’8”, it was pretty easy. One afternoon Wood asked him how he grew so tall. Looking over the fence, down into our wondering eyes, he explained.

He told us the Captain of the pirate ship he sailed on, when he was just a lad, needed a very tall matey. Since he was still growing, they decided to induce a growth spurt. So they hung him up by his ankles and the entire crew pulled and pulled on the rope tied to his hands until – just like a piece of taffy – he stretched out.

Of course, we had to know everything about the pirate life, and he taught us everything he knew – from fancy knots to sea shanties right down to the secret handshake.

To complete our education, Sal regaled us with stories about his time at sea, why he had to walk the plank, the time he crossed swords with Black Beard and how he escaped from Davy Jones’s Locker with the largest treasure chest any pirate had ever seen. When he opened said chest, he discovered precious gems, pearls, doubloons and a rather fine tiara.

With his newfound fortune, Sal decided to retire from the pirate life, settle down and buy a house. He then confided to us, since we were now fellow pirates, that he’d buried the leftover treasure in his backyard – for safe keeping.

At about this point I started getting suspicious, Sal had the same look my Uncle got when he was pulling my leg. When I voiced my concern to Wood, he wouldn’t entertain a single suggestion of doubt. Things got heated – words were said – a bet was made – we shook hands – and digging commenced.

Because unearthing Sal’s treasure was the only way to settle our argument.

When Sal disclosed his secret to us, he’d definitely pointed to the left corner of his lawn right next to the birdbath. So we started digging there with wild abandon, we might have been a bit thin on muscle, but we made up for it with enthusiasm. We also decided that archeological methods weren’t necessary since Sal had already disturbed the stratigraphy when he’d initially buried the chest. Which meant things went pretty quick.

Two hours, sixteen inches and one blister later Sal loomed over us.

He was not amused.

Instead of using the back gate between the houses, he marched us all the way around to the front so the entire neighborhood could witness our walk of shame. When we reached my front door, he loudly recounted our shenanigans to Aunt Pearl. During Sal’s booming damnation we stood silently, staring at our shoes, wishing the earth would swallow us whole.

Then my Aunt asked (as Sal had not) why we dug up his lawn. We haltingly told her about Sal’s stories, the preceding kerfuffle, and the bet. Then we waited for the other shoe to drop.

To our surprise, Aunt Pearl laughed and asked (I’ll never forget this), “Well what did you expect would happen when you told them where to find buried treasure?”. She offered to send us back to fill in the hole, but Sal firmly rebuffed the offer in the face of his own folly. Instead of grounding us (as expected), Aunt Pearl ushered us into the kitchen, gave us a cookie, then sat us down and explained what trespassing and vandalism meant.

I’m starting to think we paid more attention to the cookie.

Fast forward twenty-six years to a recent Sunday Dinner (Wood and I adopted each other at a young age, Aunt Pearl rolls with it).

Aunt Pearl (placing a slice of roast beef on my Uncle’s plate and addressing the table): “Remember when you two were convinced Sal was a pirate and did a number to his lawn?”

Aunt Pearl (ignoring my snark): “Turns out Dourwood was right, he was a pirate, of sorts.”

Aunt Pearl (trying to keep a straight face while stirring the pot): “Yes. He was grousing to your Uncle earlier in the week about how expensive cable is now…”

Dourwood practically bounced out of his seat waiting for Aunt Pearl to say the magic words….

Aunt Pearl (trying hard to ignore his glee): “…since everything went digital he can’t just pirate the signal like he used to…”

Dourwood (pointing at me across the table narrowly avoiding knocking over his glass): “HE WAS A PIRATE!”

Me (laughing with everyone): “Technicality.”

Dourwood (shaking his fists in the air in vindication): “If he pirated something that means he’s…..”

Wood: “This is so easy it is binary, either you are or are not a pirate. Since he engaged in pirating activities…..”

Me (turning to Aunt Pearl): “Are you so tired of reminding us about our disastrous dig that you needed to outsource it? Wood will never let this go now.”

Aunt Pearl (when she finally got enough breath back from laughing): “No dear, it just struck me funny.”

Dourwood: “You just don’t want to admit Sal’s a pirate and you lost the bet!”

Me: “I did not! Pirating cable is just an expression, not a vocation!”

It went back and forth like this all through dinner, dessert, and bridge until with very little grace I capitulated to Wood’s argument.

Should have know that wouldn’t be the end of it.