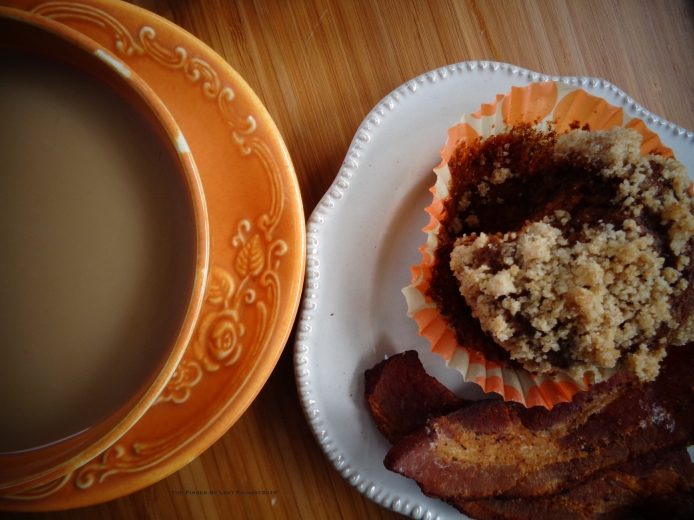 The floorboards groaned underfoot as I made my way down the hallway towards the beckoning scents of bacon and coffee. The others were still snuggled in their sleeping bags on the living room floor, the fire in the hearth warming their toes. Walking into the kitchen the vintage red cherry wallpaper, red enamel sink, glass front cupboards and white walls waved a cheery ‘hello’ in my direction. Aunt Pearl stood at the stove cooking enough food to feed a small army or Wood in the morning.

Walking to the cupboard, I opened it and grabbed a cup and saucer – then poured the best concoction man has ever made into the cup – coffee. Sitting down at the kitchen table I took a moment and savored the very first sip of the day. My Aunt familiar with this ritual waited until said sip passed my lips before making conversation, “The others still asleep?”

Resting my elbows on the tabletop, I held the cup under my nose, “Yeah, they’ll be out for a while yet. Long night.”

I did know she wasn’t irritated about last night’s late hour since she never threatened to put us over her knee. Wood and I might be thirty-something but every now and again we do something silly enough to warrant her standard threat (which in all fairness she’s never actually carried out). It’s just her way of letting us know we’re leaning on her last nerve.

“Thanks for coming to get us last night and grabbing Beatrice’s car on the way her,” taking a nice big second gulp of coffee, trying to quickly conclude this portion of the conversation.

After flipping some flapjacks onto a plate, she answered, “Your welcome dear. We thought it would be faster to pick you up than bail you out.”

Laughing softly into my cup, “I’m sure it had nothing to do with Wood texting you to come get him and his mateys, right?”

So, amongst the giggling last night during our impromptu sleepover, which struck all our silly bones, Wood admitted that he’d texted Aunt Pearl and Uncle to come get us. She’d asked him to take a photo of me in full pirate regalia when I settled up on our ancient bet. He did one better and tempted her out of the house at one in the morning to take her own pictures. I am pretty sure she’s going to get an eight by ten made and place it smack dab in the middle of the living room mantle.

Robbie howled when we’d stumbled in the front door, he’d been eating a late dinner with them when he got the text from me – I didn’t mention a word about our ensembles. During dessert, Aunt Pearl got Wood’s follow up text which coaxed her into action. Robbie stayed to see how committed we were to the bit, he should have known we’d go full pirate – it was Wood’s plan after all. Wood did apologize for my mortification, but The Brace Affair went so spectacularly awry, he really felt we needed to end the night with a laugh.

Aunt Pearl’s voice recalled me from my musings, “Of course not dear, that was just a happy accident.” Her voice sounded bland, but I knew better. Her back was turned because she didn’t want to show how funny she found the entire situation last night. She doesn’t get roped into our mischief very often, anymore. “Are you working today?”

Feeling the marrow in my bones droop, “Yes. Just a half day though. I only have two more days, including today, left of this insanity.”

“Well hard work builds character.”, she placed a plate of fresh pancakes in front of me and topped off my coffee. “To keep your energy up.”

Digging into the stack of flapjacks Aunt Pearl took the reigns of the conversation while I chewed, “Oh. Remember when you asked me about Tiffany Grindle, my old student who went missing twenty years ago?” Walking over to the table she placed the newspaper to the right of my plate an opened it to the front page (my fingers were sticky with syrup), “They found her remains last week up in the mountains about fifteen miles from where they found her car.”

I choked on my bacon.

Trying to clear my airway gave me the moment I needed to contain my jubilation, “They found her last week?”

Aunt Pearl stopped whacking my back and went back to her position in front of the stove, “Yes, apparently the police kept it under wraps until now, waiting for a positive identification. They’ve had a few false started over the years, so they wanted to make absolutely sure before they went public. But that’s not even the most interesting part!”

My name is Phoebe Arden, and I used to be the Caretaker of Nevermore Cemetery.

My job is more than just mowing lawns, digging graves and thwarting vandals. The problem is my boss doesn’t understand what exactly my job entailed (or in fact any of my duties).

Now I am on the outside looking in, and I still need to protect Nevermore from Little Ben’s schemes, internal decay, and corrosive outside influences.

This is going to require coffee. Lots and lots of coffee…and maybe an eggroll.

Where my story starts: 1.1 Mondays