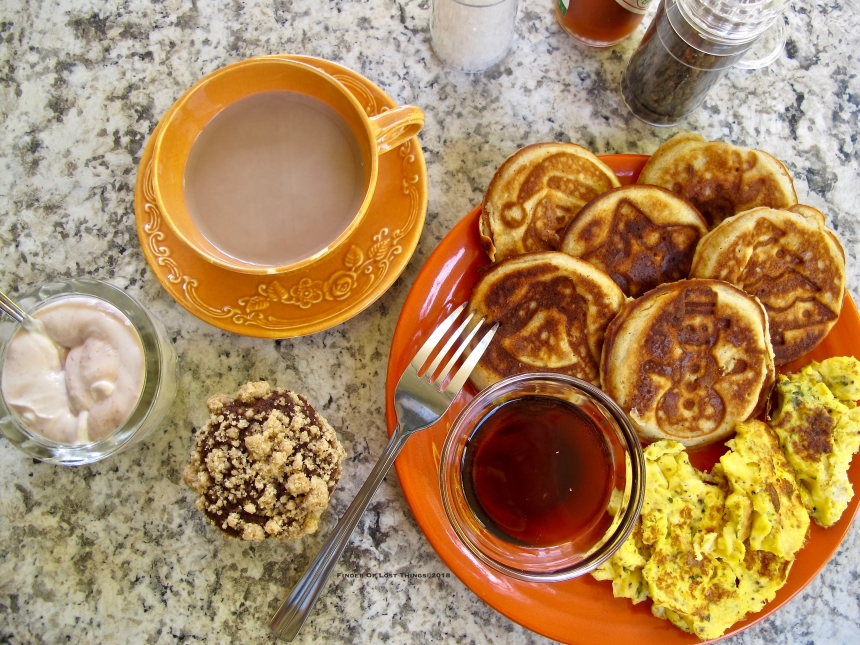 Looking far more alert than he had a few minutes previously (I blame the bacon, coffee would never do this to me) Wood went on, “Yeah, Morticia and I met Ranger…Ranger…Ranger Lade when we stayed at the Hilltop Hotel, on Ross Lake.” Eating a slice of bacon thoughtfully, “Morticia did you ever send him those scones you were talking about?”

My Aunt glanced between Wood and I, “Why would she send him scones?”

Before I could answer Wood lept in, “Morticia and the Ranger lobbed some pointed words at each other, which she regretted afterward. She thought sending scones might make up for her part in the episode. So did you?”

Tap dancing around my actual actions, “Nope, no bacon maple scones for the ranger. I thought it set a poor precedent to send pastries to anyone I crossed swords with, plus it felt a wee-bit stalkery.”

Okay, I know this conversation doesn’t sound dangerous. However, I saw the trap that Wood’s words inadvertently placed before me.

While strangers might not be able to figure out the part I played in leading the police to Mr. Grindle – these three could. Wood’s curiosity and intelligence could knit together Aunt and Uncle’s facts with what happened on our trip – thus leading him to me. My Uncle’s intuition coupled with a few peculiar incidents from my childhood (and Wood’s commentary) would allow him to make the same leap. Then there’s my Aunt, whose lie detector is finely wrought after four decades worth of students filtering through her home economics classroom. She can sniff out a lie at fifty paces. Which would cause her to ask more and more awkward questions until Wood and/or Uncle figured out I sent the anonymous letter.

(Just for the record, I don’t generally try to lie my way out of awkward conversations that my…..knack……occasionally places me in. I might hedge, nudge or massage the truth sometimes – see above – but outright lying I work hard on avoiding. The consequences, when you get caught, are never good. Especially when Wood discovers one. But that’s another story entirely.)

Fortunately, Aunt Pearl was unable to resist the softball I pitched her way, “What have I always said Phoebe? You catch more flies with honey than vinegar.” These advise adjacent words caused Wood to smirk into his coffee cup and my Uncle to pat me on the back. My Aunt simply waited for my agreement.

Interjecting before the required response could leave my lips, “In Morticia’s defense he did call her stupid….” Wood’s words sent my Aunt and Uncle into fits. In the hubbub he’d created I cleared away my dishes and grabbed a slice of bacon for the road.

Knocking the conversation off on a new tangent (and further away from flimsy ground), “Uncle can I bum a ride back to the Lavender Lady? My shift starts in an hour, and I need to shower and change.”

Pushing himself away from the table. Uncle cleared his plate and headed towards the door, “No problem.” He paused for a moment while I gathered up the bits and pieces from my pirate ensemble. Eventually, I followed him to the door.

Both he and my Aunt ignored the rubber ducks which spilled out of my bag and onto the floor while I fumbled with my jacket.