Using subterfuge learned from my seventh grade English teacher Mrs. Krimple (who, when her back was turned, kept tabs on us in the reflection of the window next to the blackboard), I watched Little Ben stop dead in his tracks when he caught sight of me behind the desk. His surprise quickly morphed into suspicion, casting a swift glance over the contents of the conference table, his face filled with relief when he found the papers undisturbed.

Focused on controlling my breathing (no reason to make him wonder why I was huffing and puffing), I continued to feign ignorance at his entrance, then watched his relief fade and irritation grow under my continued silence (taking a page out of chapter seventeen of Wood’s textbook)

Little Ben (stomping toward me): “What are you doing behind my desk?”

Me (turning to look him in the eye): “Enjoying the view.”

Unwilling to relinquish my place behind the Proprietor’s desk, I leaned a shoulder against the chilly window, ignoring Little Ben’s shooing motions.

Me: “Ben, why did you ask The Naturalist Club and the Historical Society to leave Nevermore?”

Little Ben (stopping at the edge of the desk): “I didn’t ask you up here to discuss my plans.”

Me (the sting of an electrical current sparking over my toes sucking the civility from my voice): “Oh, I’m sure you didn’t, but that’s where we’re starting.”

Gaining a slightly distracting ally, Orin strolled past Little Ben to stand next to me.

Little Ben (attempting to override my question): “I want to talk about a blip in security.”

Without taking my eyes off Little Ben, I shook my head no once, Orin tapped my shoulder in acknowledgment.

Orin: “Well, let me know if you do. When you finish up here, can you meet some of us under the Big Cedar?”

With an acknowledging dip of my chin, Orin departed, and I got down to brass tacks.

Me (glomming onto the title of Little Ben’s pipe-dream-dream-boards): “Does Big Ben know your plans to rebrand Nevermore?”

(Not that I knew what they were, but fifteen feet of poster board denotes some significant changes in the works.)

Little Ben (grinding his teeth): “Dad made me Provisional Proprietor.”

Me (flatly): That doesn’t answer my question.

Little Ben (defensiveness lacing his voice): “I don’t need to. I’m the Provisional Proprietor. Dad’s letter is there on the desk if you don’t believe me.”

Following his outstretched finger, I spied an envelope sitting in plain sight on the side of the desk (which probably reassured Little Ben that I hadn’t pawed thru his papers), pushing off the window I stepped over and picked it up. Coffee stains covered the entire front, the address reminded me of an inkblot from the Rorschach test, as the liquid had rendered the writing nearly illegible.

Flipping it over, I slid several (shockingly pristine) pages out and started to skim Big Ben’s neat writing. When Little Ben answered his cell, I took advantage of his distraction and took a pic of the letter’s first page (I’d taken pictures of everything else). 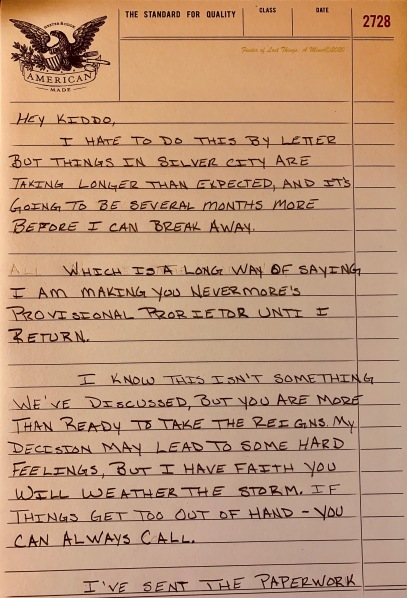 It confirmed Little Ben’s appointment as the Provisional Proprietor, which was hardly surprising, he was Big Ben’s son.

(I am still surprised that Big Ben rubber-stamped my lay-off, however.)

Little Ben (still distracted by his phone): “So glad we cleared that up. Now, about this security blip. A few weeks back, Dad’s alarm code was used to disarm this building. Obviously, it couldn’t have been him and I’m not sure what happened. The cameras malfunction the same night as well, so they’re no help.”

Ignoring his question for a moment (since I knew what was behind his “security blip”), my mind spun in another direction, on to another explanation for Big Ben’s prolonged absence.

Big Ben always said he’d only retire when he went toes up.

Taking advantage of my stupefied silence, Little Ben used his personal space (i.e., bulk) to edge me out from behind the Proprietor’s desk. Taking a seat, he fiddled with his papers for a moment, then waved me towards the guest chair already occupied by my stuff.

Me (blindly following his invitation): “Ben is your Dad okay? Did he have a heart attack? Stroke? Broke a hip? Cancer?”

Me: “Was he in a car accident? Diagnoses with dementia? Blood clots?”

Little Ben (flummoxed): “No. No. No! Nothing’s happened! You know Pop, he’s healthy as a horse.”

Me (continuing my rapid-fire): “Then where is he?”

Little Ben (defensiveness lacing his voice): “He’s still in New Mexico, working on a project with a buddy, said he needed some extra time to get it up and running, so he made me Provisional Proprietor.”

Me (still fishing): “Does he still call for weekly updates?”

Little Ben (throwing up his hands): “Not weekly. Look, about the security blip, none of the locks were tampered with, nothing was taken or disturbed. I don’t want this happening again, do you have any ideas?”

Deciding he could do more harm if he tried to solve this problem on his own, I outlined some steps to ward off future ‘malfunctions’. Including carrying out long-overdue system maintenance and issuing new alarm codes to all employees. Which, unfortunately, will seriously curb any future surreptitious after-hours undertakings by yours truly.

Me (closing my eyes and taking a deep breath, I debated my options for a moment): “If you can’t find any evidence of tampering, this is what I would do…”

This day just keeps getting better and better.