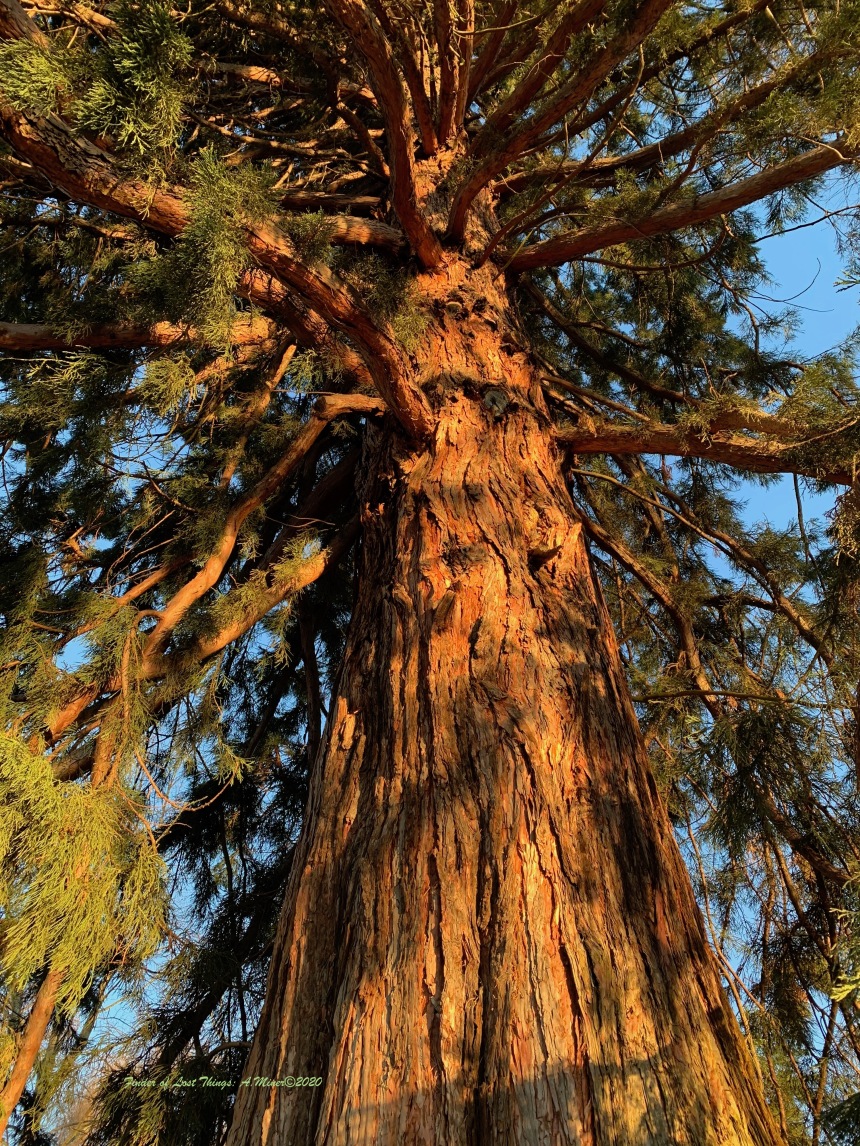 (Now, I’ve never been to California and seen the Redwood Forest – but this is what my imagination pulls up when I think of them…)

Spotting a flash of light off in the distance, I shrunk into the deepest shadow shrouding the corner between the South and West gates of The Crossroads. Straining my ears, I heard the tell-tale sound of tires striking a speed bump as the automobile rolled closer. Channeling my inner redwood, endeavoring to match the stillness of those massive trunks, I watched the car carrying Nevermorian security cruise unhurriedly past my hiding spot. Admittedly there’s a substantial expanse of grass between myself and the cruiser – but even a locked door – draws the critical eye of a good guard.

It wasn’t until the red glow of the taillights finally faded to small specks that I let my mind drift off of its tremendously tall loci and exhaled gustily. Detaching myself from the gloom, I jogged in place for a minute to warm up. (By way of payment, the walls responsible for casting the concealing shadows, sucked the warmth from the marrow of my bones.) No longer as stiff or chilly, I pulled up my sleeve and stared at two glowing green hands.

Thirty-four minutes had already slipped by since I scampered out my front door.

Dear gods above and below, please let Leo, Robbie, and Beatrice have found something in their research that immediately arrested their attention. Thus allowing my pretext, of heading down to the Map Room to fetch my old school yearbooks, to stay intact. Because I really don’t want to own my overriding reason for following Ira to Nevermore.

On the upside, I’ve landed on a plausible and truthful rationale for keeping tabs on Ira – should anyone realize I’ve scarpered. I’ll cite my genuine anxiety about Ira’s safety. Since he needs to waltz past the majority of people cahooting together to retrieve the potential evidence of Sarah’s duplicity. (Thus, my tail makes sense.)

At no point, if an explanation is required, will I concede my genuine motivation. Which essentially boils down to Ira’s parting shot – “I’m going to Nevermore, what could possibly happen?”

Seriously? Would you care for the answer in alphabetical or chronological order.

In an attempt to make him appear less tempting to the Fates, I enlisted the aid of someone who’s aces at tiptoeing around Nevermore undetected. As I couldn’t just let Ira stroll thru automatic doors of Nevermore’s main building (mosey his way back to the security hub, copy several days worth of security video & logs, then retrace his steps) all by himself.

Hence my pell-mell run down the back garden path, over several neighboring lawns, and along the sidewalks to the closest corner of Nevermore. Pleading to the universe during the entire – heart-rending, lung-busting, sneaker-slapping – run for Joseph to be hanging about The Crossroads tonight.

Someone must’ve heard me because no sooner had I tripped onto the grounds – Joseph was at my side. Doubled over and panting, I managed to vocalize Ira, main building, and keep safe.

He needed no other information.

Raising my cuff, I glanced at the luminous hands on my watch again and found only two minutes had ticked by.

Waiting is the worst.

“He’s safely out of Nevermore.”

Leaping six inches in the air at the wildly unexpected sound of Joseph’s voice next to my ear, I narrowly suppressed the surprised scream my throat yearned to expel. “Jiminy Christmas, you should wear a bell….Thank you for looking after him.”

A smile I couldn’t see, due to the lack of light, colored his voice. “You are welcome. Though he needed very little help from me.”

“Thank the gods.” Shoulders sagging, my mind spontaneously called up the image of the redwood again. Only this time, my feet were its roots, and I watched my anxiety flow thru them and saturate the ground beneath my sneakers.

(It didn’t seem to matter much to my mind that this wasn’t how roots worked.)

Head tilted, I saw concern in Joseph’s eyes as a match flared to life, lighting the cigarette stationed between his lips. “Why the panic? Ira didn’t go anyplace he didn’t rightfully have access too.”

Transfixed for a moment by the red coal, which glowed a hair brighter as he inhaled, it took a moment to recall my reasonable and honest excuse. “He might’ve been caught in the midst of downloading some compromising information…”

“Indeed.” The amused tinge of his voice spoken volumes.

Scuffing the toe of my sneaker on the ground, I gave in. “Alright, Ira tempted the Weird Sisters right before he left the apartment, and I couldn’t take a chance of something or someone happening to him.”

Tilting his head, he took another drag of the cigarette. “You worried he might come to harm?”

Snorting without humor, I tipped my head back and stared at the twinkling stars for a second, forming my reply. “Maybe? Worst case scenario…”

“Why take the risk?”

“Proof, he and the others needed a hair more to fully believe Sarah’s guilt.” Straightening my shoulders, I dove straight into the niggling set of doubts that’d been pestering me. “You remember the incorrect dates Sarah gave me for the arrival and burial of Tiffany Grindle’s remains? She was the only one who knew there was a chance I was going to break into the building and/or creep about Nevermore…”

“…and if she set a trap, you’d know for certain where her loyalties lie.”

Holding the half-finished smoke towards me, I shook my head at the unspoken offer (Joseph has far superior night vision) and answered his other question. “Let’s just say her explanation for the mix-up no longer satisfies.”

He paused, holding in the lungful of cigarette for a moment before expelling it. “These fabricated dates of Sarah’s started the night after you subdued the Woman In White, correct?”

“And the three following…” My voice trailing off as the implications of his answer hit me – extinguishing the small sliver of hope I’d unconsciously held onto in a dark secret part of my heart.

I watched his still smoldering smoke drop to the ground and disappear beneath the heel of his shoe. “Security guards were stationed all over Nevermore and inside Sarah’s Domain & Depository for the seven nights following our…adventure.”

Rocking back, I blinked quickly up at the moon, trying to breathe around the lump in my throat. Should’ve taken a puff of his cigarette, could’ve blamed the salty liquid leaking from my eyes on smoke irritation.