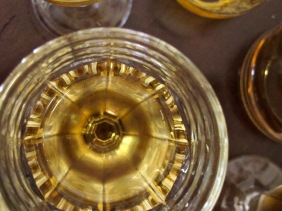 Piling the leftovers back into the box (we made quite a dent, and to my supreme joy – I would have hom bow for breakfast!). Unfortunately, our cleanup gave Wood the opening he needed for his own investigations…

Wood (indignation coloring his tone): “Morticia! You drank my soda.”

Sarah: “I thought you were going to say, ‘you sunk my battleship!’”

Beatrice (laughing): “He’s mad she filched his whiskey and soda.”

Me (with an air of satisfaction): “Sure did, no guilt at all, though that might be the liquor talking.”

Beatrice: “Actually, I believe you both owe me one. Since Phoebe finished off the liquor, you pilfered from my cabinet.”

Ignoring Wood’s sputtering, Beatrice pulled a bottle (and four glass) out of one of the cupboards in the front while I wiped down the table. She poured an inch into each glass and passed them around, then unfurled the map. Clustering on the southern edge, scouring the surface trying to find Pumpkin Mountain amongst all the other entertainingly named features. My favorite? Joker Mountain, everyone needs a hidaway I suppose.

Beatrice (pointing at a feature near the middle of the map): “There, Pumpkin Mountain right on the lake.”

Wood (tracing his finger over the map): “That’s right. Laney and I went the Hilltop Hotel just south of there this last summer – we played on the lake the entire time. We never hiked up that far…”

Laney chose this year’s vacation spot, a trip which did not feature any soccer or soccer adjacent events the entire week.

Me (following hiking trails with my finger): “Looks like I’ll have to hike in.”

Me (the whiskey slowing my ability to think of a plausible explanation or of anything at all, so I said the first thing that popped into my head): “Thought it might be a fun fall expedition.”

Wood: “That’s a great idea! Laney’s been dying to get away. I thought we’d hit L.A. and watch an L.A. Football Club match. But this is so much better! You’ll go, Bee? And you too Sarah? We’ll stay at the Hilltop Hotel and hike up Pumpkin Mountain! I’ll get so many husband kudos! Woot! We can even take the boys!”

Wood started doing a little dance around the shed (I say little because while spacious, we were still in a shed). His enthusiasm was infectious.

Beatrice (laughing): “When do you want to go?”

Wood whipped out his phone and started furiously typing on it, then borrowed Beatrice’s and started talking to someone on the other end, while firing questions at the three of us.

Me (inwardly & outwardly fretting): “Wood, I thought I’d go up by myself, camping…”

Wood: “Don’t worry Morticia, Laney and I will cover your room. It’ll be your early birthday present! You’ll have more fun with us!”

Any other time trying to get our schedules to line up was akin to herding kittens, but somehow in under thirty minutes Wood, Laney (via text), Beatrice and Sarah worked out a three-day Fall Foliage Tour.

Fantastic. How on earth was I going to find and nullify my tag-along with all of them hiking with me?