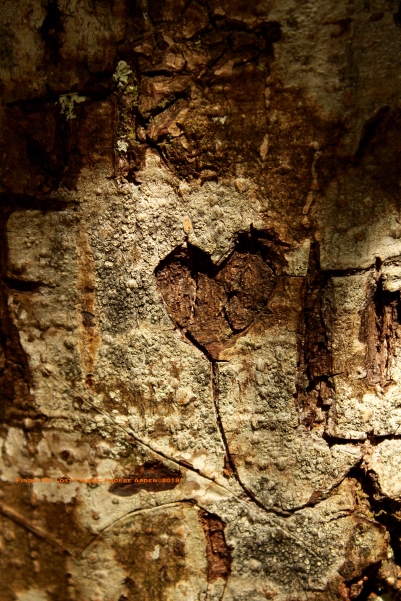 (My very sophisticated tools and a random heart I found carved near the glade!)

My friend’s voices evaporated away into silence quicker than I expected while following the invisible line thru the old growth. Fortunately, I didn’t need to venture very far outside of my comfort zone, the pricking in my toes turned into a steady thrumming sensation when I stepped into the narrow glade.

Studying the clearing, I appreciated the cleverness of the hiding spot. Now I understood why no one ever accidentally stumbled upon my unintended traveler.

The glade owed its existence to dozens of rockfalls deposited by the cliff which heaved itself up in front of me (who knew boulders could bounce?). The rockfalls kept the area clear of anything more than the scraggliest flora the forest had to offer. Immediately inside the cliff’s hurling radius lay my destination, a modest mound (by comparison) of discarded stones. Due to the layers of moss, long grass, sword ferns and one scrappy cedar, it appeared to one of the oldest of the cliff’s deposits.

I looked at my watch. Time’s up I murmured to myself. The possibility of seeing my posterior au natural would only keep my compatriots at bay for so long. Soon, they’d come looking for me.

When I emerged back at our picnic site, Bert and Ernie greeted me like a long-lost friend.

Wood (balling up the brown bag his lunch came in): “Everything ok? We’re almost done eating.”

Me: “I’m fine, I don’t think my stomach is accustomed to processing an entirely organic dinner.”

Beatrice (concern & reluctance coloring her tone): “We could turn around and head back…”

Me: “Don’t do that. The summit is only a half hour-ish away, I can wait here while my stomach calms down. You can pick me up on your way back.”

This plan met with varying levels of reluctance, but in the end, my vote broke the deadlock. The group would continue without me. Wood placed me under strict orders that I would stay put until they got back (I crossed my fingers). Waiting until their voices faded into the distance, I dashed back into the trees.

The second time I entered the glade I stopped to observe the area with jaded eyes, the dozens of natural phenomenon camouflaged the one false feature well. Knowledge or happenstance? Which did he rely on I wonder to conceal her genesis point?

Leaning my pack against a nearby stone, I pulled my recently acquired map and trusty GPS device out then recorded the coordinates next to the ‘x’ I’d written on my approximate location. With that done I set to work with my handy collapsable metal shovel and work gloves. Pulling the blanket of fauna away from the false rockfall proved easier than I expected, the large stones concealed underneath aided my progress.

Two scrapes, one smooshed toe and forty-five very sweaty minutes later – my efforts and elbow grease uncovered two-thirds of a rough stone cairn (the cedar proved too tenacious to remove).

Pulling off a work glove I placed my bare hand on an exposed stone – an electric current raced up my arm – startled I snatched my hand away. I rocked back on my heels while rubbing the spasming muscles in my arm. Trying to calm down I closed my eyes and enjoyed the brisk air playing across my sweaty face, but my mind wouldn’t settle. Instead, it flew away trying to merge and manipulate this new wrinkle into something which fit into the whole I’d pieced together. Shaking myself, I stood up stiffly and put my glove on again. I could borrow trouble later.

Making an ungodly racket (and risking pinched fingers) I levered a rough line of rocks off the spine of the cairn. I couldn’t help the noise. I needed to finish before my friends swung back to collect me and time was running out. When I finally shoved the last rock aside, I collapsed my spade and traded it for a five-pound bag of salt from my pack.

Taking a deep breath, reigning myself in – I poured a steady, unbroken line of unrefined sea salt within the fissure I’d just created. To help infuse the salt into the cairn quicker, I poured a canteen of purified water roughly along the same dusty off-white line. Then I exchanged the empty container for the other five-pound sack of flakey sea salt. Then proceeded to methodically cover the entirety of the mound and surrounding ground with a fine dusting. When the bag was exhausted, I stowed it away and surveyed the area making sure I left nothing (other than the sea salt) behind.

With the job done I grabbed my pack and walked away.