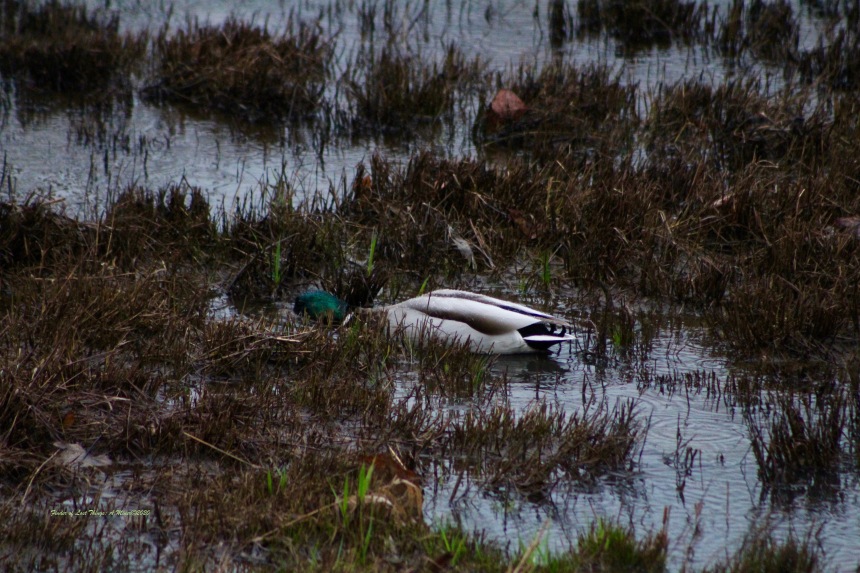 (Okay, so it wasn’t quite this wet…but it felt like it!)

Problem solved, Little Ben promptly expelled me from the Proprietor’s Office. Which initially, I found vexing as I still had several more questions to ask him. But his haste did provide one advantage – he never gave my bulging PULP tote a second glance. Allowing me to stroll out the main doors to the Princess (after retrieving my keys from Sam in Reception) with a bevy of snaffled documents without anyone being the wiser.

Stowing the aforementioned tote in the passenger side footwell, as the Princess’s backseat/trunk was filled with moist cardboard boxes, I gave a flummoxed looking Lottie a little wave and drove further into Nevermore. It didn’t take long for the Big Cedar to come into view, but it did take a few minutes to wend my way to the parking spot beneath it’s dripping boughs.

Wishing that the weather would let up for a few minutes (it didn’t), I pulled on my hat & gloves and exited the Princess. My prickling toes leading me over some seriously squelchy turf directly to the knot of waiting Residents Orin asked me to meet.

When I stepped into the thicket, they erupted in unison: How are you feeling? / Orin & Joseph said you were fine, but we wanted to make sure. / What made you mad earlier? Little Ben? / We missed you. / Did you really stop the Woman In White by yourself? / Everyone’s okay. / You should see my squirrel, he’s so cute now!

After assuring them, I was on the mend (visibly reducing their anxiety). Let them know Orin had relayed their get-well wishes (making him beam). Expressed relief the Woman In White hadn’t harmed them (wreathing the group in smiles) and let them know Joseph was the one who’d really saved the day (a clarification none accepted, which was weird). They caught me up on all the latest gossip in Nevermore (mainly encompassing the work ethic of the two new groundskeepers & Mazy’s squirrel buddy).

Only after I let loose a bone-rattling shiver did Orin call the congress to a halt (wool, a wondrous fiber, can only absorb so much water).

After many goodbyes and a bit more squirrel gossip, Orin accompanied back to the Princess, ostensibly to keep me from slipping on the swampy grass. However, my spidey sense was tingling (which was about the only sensation I could feel – since everything between and including my fingers and toes felt numb). He waited until we were well away from the others before he spoke.

Orin (quietly): “I happened upon an Errant, Caretaker.”

Well, this day just keeps getting better and better.

Me (sinking laces deep into the mud): “What happened?”

Orin: “Took a stroll through the old neighborhood to see what’s new when I caught a glimpse of him in Remembrance Park. Before I could decide what to do, he saw me and Flared.”

Me (back under the Big Cedar I used a rock to scrape some of the mud off my shoe): “Well, that’s something. I take it you’ve not bumped into him before?”

Me (studying my slightly cleaner sneaker): “Did you tell Joseph?”

Orin (nodding): “Yes, he’s prohibited anyone from venturing within a six-block radius until you investigate.”

Me (sighing): “Anything else?”

Orin (thoughtfully): “The Flare felt more like a warning, don’t come closer, rather than belligerent.”

Me (nodding while unlocking the driver’s side door): “Thanks Orin, I’ll check it out.”

Squeezing my shoulder once in sympathy, Orin turned on his heel and strode away. Ensconced in the Princess, I cranked up the heat then rested my head against the steering wheel. Waiting for the feeling to return to my extremities, acknowledging what the weather tried to tell me earlier – I should’ve stayed at home (if nothing else today proves the old adage when it rains it pours).

Seems my recovery/break/staycation is over.

I need something sweet.