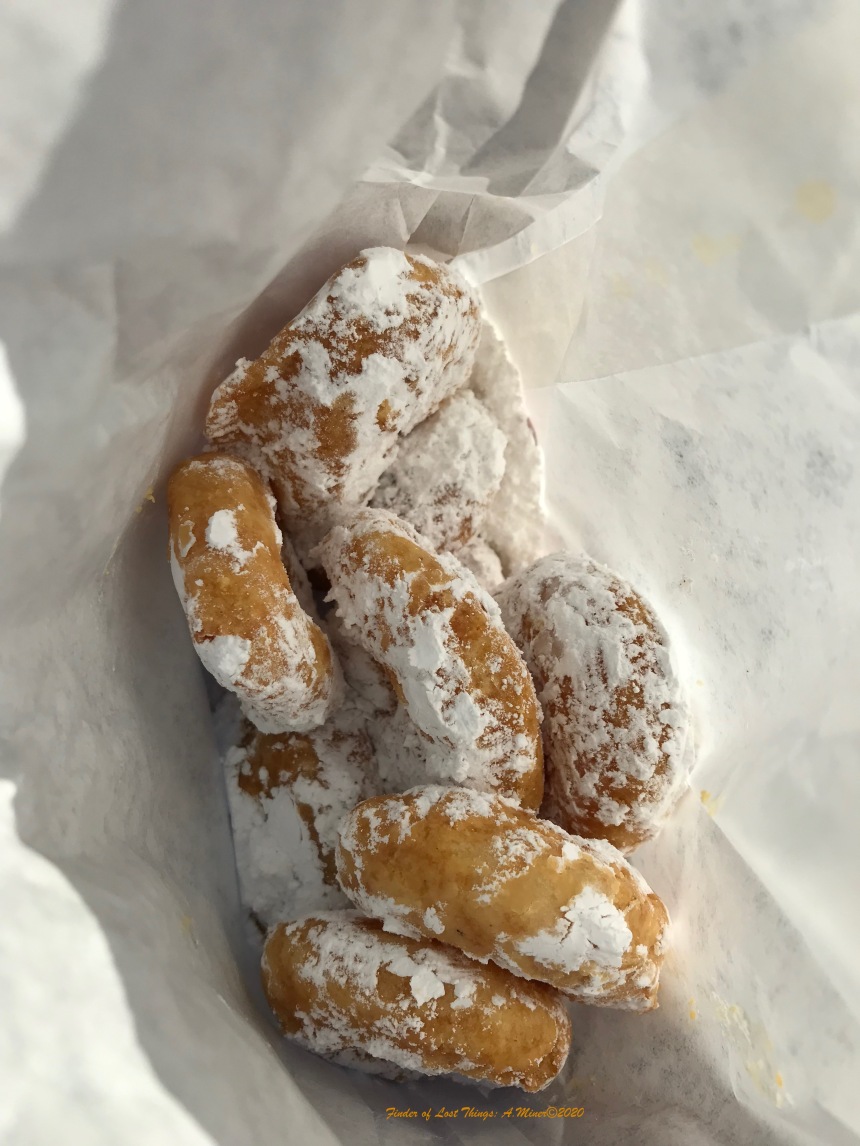 Triumphant returns take many forms, sometimes the hero is heralded with ticker tape and trumpets. Other times it is a restrained nod of a coworker at the office water cooler. If you’re Bilbo Baggins, you’re met by an empty house cleared out by your lamentable relations. Mine? The Senior Center crew (aka my FLYT regulars) met the Princess and I in the Center’s parking lot with a bag of mini doughnuts from Fryed and friendly smiles. (Or in the case of the other Senior Center FLYT driver desperate relief – apparently, they worked him but good while I was gone).

Their warm reception, featuring powdered sugared sustenance, helped dispel a fraction of the blue funk I felt over losing significant ground in my rat hunt.

While happy to see me, The Crew apparently had bigger fish to fry, so after one last demonstration of genial affability, a pat on the hood for the Princess and the arm for me, they returned to their ruminations. The air around them was so pensive I don’t think I could lighten the mood if I tried. Though I’d like to imagine making a ludicrous announcement – such as an intent to swap my stock chauffeur’s uniform with a pink-polka-dot bikini and sparkly silver Ugg boots – might at least have drawn a chuckle.

So instead of making a funny, I kept my mouth full and ears open to the grist they were milling.

Mr. Fernandez (confirming something Mr. Eccles said that I didn’t hear): “My daughter told me the same thing.”

Happily, before I pinged their radars by asking a followup question, Mrs. Lebondowsky, who’d huffed and puffed her way from the bus stop to the same cluster of The Crew I’d just joined, asked it for me.

Mrs. Lebondowsky: “Told you what Albert? Hello Phoebe, sorry I’m late, dear. My Frank couldn’t find his glasses. Turns out, he’d tucked them in my carryon and forgot to take them out when we got home yesterday.”

Mr. Fernandez: “Elena told me the Naturalists Club and the Rye Historical Society voted to band together last Friday.”

(Band together? On one side, you have detail-oriented individuals with an in-depth knowledge of Rye highly. On the other, you have a leadership group with literally decades of experience in civil disobedience and a pack of fearless kids backing them up. I have a feeling neither side will go gently into that good night. Bad news for Little Ben.)

Mrs. Lebondowsky (eyes wide): “My Frank and I missed a meeting! What happened?”

Mr. Nelson (jumping in): “The City put up construction and inspection boards in front of their buildings.”

Mrs. Lebondowsky: “What does that mean?”

Mr. Nelson: According to the review boards? It looks like Little Ben wants to redevelop the Nevermore by tearing down both buildings and chopping down a good chunk of The Woodlands.

Mrs. Lebondowsky (turning to me): “Can you stop this?”

Mr. Fernandez answered for me as I’d just stuffed my face with a mini doughnut.

Mr. Fernandez: “That’s not fair Vi, you know that Junior laid her off for no good reason.”

(This is why I stay on their good side: I never mentioned why I started driving for FLYT. But given their brains, silver-haired camouflage, and spare time I’m not surprised they ferreted out why I started my career as a chauffeur. They can dig up pretty much anything they want about anyone in Rye…….wait that gives me an idea…)

Mrs. Lebondowsky (wringing her hands): “Your right, I know your right…I apologize, Phoebe.”

Me (thickly): “Don’t worry about it. I’d ask the same question if I were in your shoes.”

Putting a pin in my bolt of inspiration, I nudged the conversation onto more material matters after Mrs. Chen was nearly run over by a car pulling into the Center’s lot.

Me (raising my voice): “Okay guys flip open your phones, I’m going to switch my ap to on duty so you can book rides with the Princess and I again!”

After The Crew located their readers and phones, they counted me down (just like New Year’s Eve) from five until I swiped my FLYT meter to ‘on’. Twenty-five minutes of furious activity (and a bit of swearing) ensued as they filled the bulk of my regular FLYT hours for the next few weeks – which warmed the cockles of my heart even better than the doughnuts (as rent is due with depressing regularity.)

Mrs. Lebondowsky scored my first block of time for the day.

Me (buckling my seatbelt): “So what’s our first stop? Pins & Needles?”

(Rye’s finest fiber gallery & fabric store and her home away from home.)

Mrs. Lebondowsky (her ears turning pink): “Well, I think I need to stop by the Naturalist Society first. I’ve drafted a few crochet patterns for the fundraiser, and I should drop them off so they can add them to the shopping site immediately.”

Me (turning the engine over): “No problem, Mrs. Lebondowsky.”

Turning out of the Senior Center’s parking lot, Mrs. Lebondowsky switched the radio on and hummed happily along with KARB’s current musical selection – Ravel’s Bolero – for a moment before she let lose a quiet chuckle.

Mrs. Lebondowsky: “Thank you, dear, for not turning a hair at my request, Dear Frank really hates it when I’m a nosey parker.”

Me (grinning with her): “No problem, Mrs. Lebondowsky.”